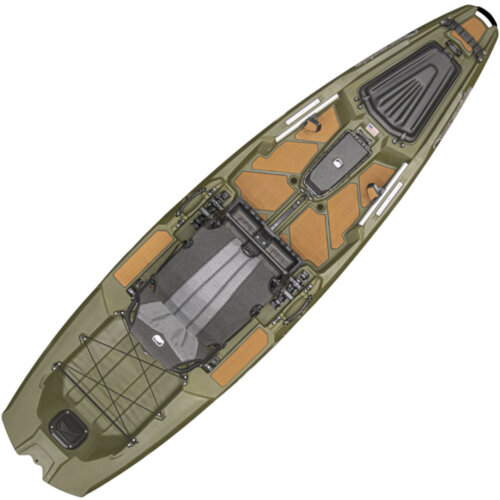 Kayaks can be delivered free in the Greater Orlando, Florida Area. Otherwise, kayaks are shipped via freight to commercial addresses. Contact us for residential shipping options.

The Bonafide Kayaks SS107 Fishing Kayak is the result of countless hours of R&D and has been carefully crafted for Ultimate Fishability. Designed for maximum stability without sacrificing paddling performance, and angler friendly features where you need them, you really have to paddle this craft to fully appreciate it. Call or stop by Travel Country Outfitters to schedule your private demo today!

The Bonafide SS107 experience starts with the incredibly comfortable HiRise seating system. The ultra-high seat allows you to sit with your knees bent, taking pressure off of your lower back. If you want to really dig in and cover some distance, the SeatRack and foldable seat frame allow quick and quiet conversion to a lower position.

You’ll notice right away that the SS107 is one of the most stable kayaks you’ve ever been in, which is surprising considering its 34.5” width. It’s not kind of stable. It’s crazy stable. A few paddle strokes later will leave you wondering how a kayak this stable and only 10’-7” long paddles and tracks so well. Stop paddling, and the next surprise is the smooth and sustained glide. The icing on the cake is that in spite of all of this, the SS107 turns really well. How did Bonafide get all of this performance into one hull? They tested, they measured, they refined, and they did it again - over and over and over until they got what they were looking for.

A great paddling kayak is nice, but a great paddling fishing kayak requires more than just paddling performance. It requires something Bonafide calls “Fishability”. It’s feeling confident enough to move around or even stand up and fish. It’s having your gear out of the way but within reach. It’s the comfort and ergonomics that enable long days on the water. It’s every piece, every part, and every function being carefully designed for versatility and with the kayak angler in mind. It’s an overall kayak angling experience in which things work the way they should work. For Bonafide, the bar was set at Ultimate Fishability.

The Bonafide SS107 is truly an incredible fishing kayak. But don’t take our word for it. Call or stop by our store to schedule a demo, and try it for yourself. We think you’ll agree.